OPI How Great is your Dane and foil stamping

I can't believe it's been a full two months since I've last posted anything. I've only just checked my blog email account for the first time too.  Even my actual digits are feeling neglected, barely getting re-done every week.

I still have a monster back-log of manicures to post that need editing etc etc, and since moving in with my boyfriend I feel like majority of the photos have been taken on my iPhone so the quality isn't great.

Maybe some time this year when we've moved house, have gotten settled and have a little Frenchie pup I'll manage to catch up with everything and start fresh!

Until then, here's some wintery nails which I think are from September October time, when I had started growing my nails into a long almond shape, but after a bad break after much filing/growing/care I soon went back to the usual, and easy square shape. 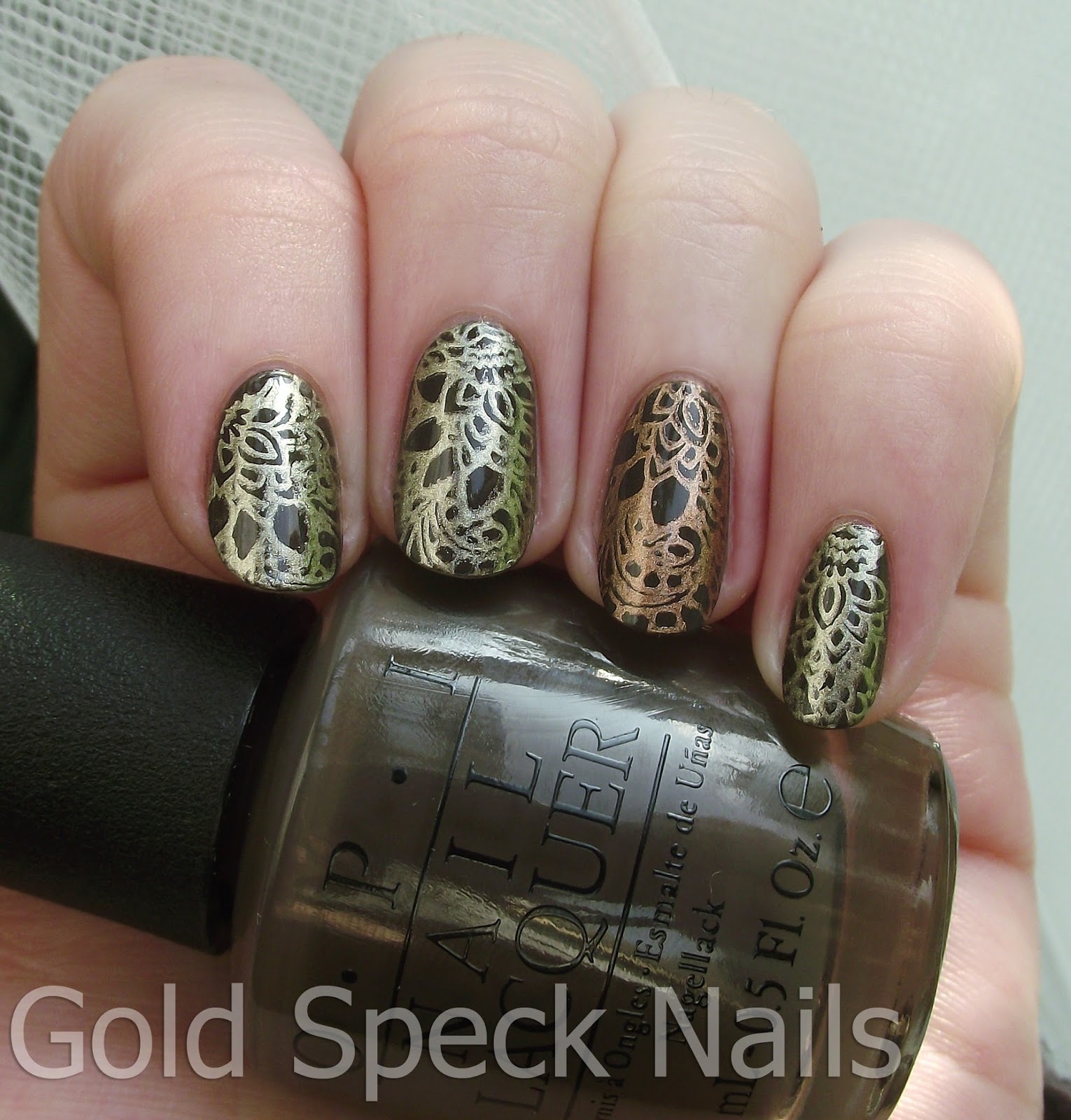 And here's a swatch of the lovely How Great is your Dane: 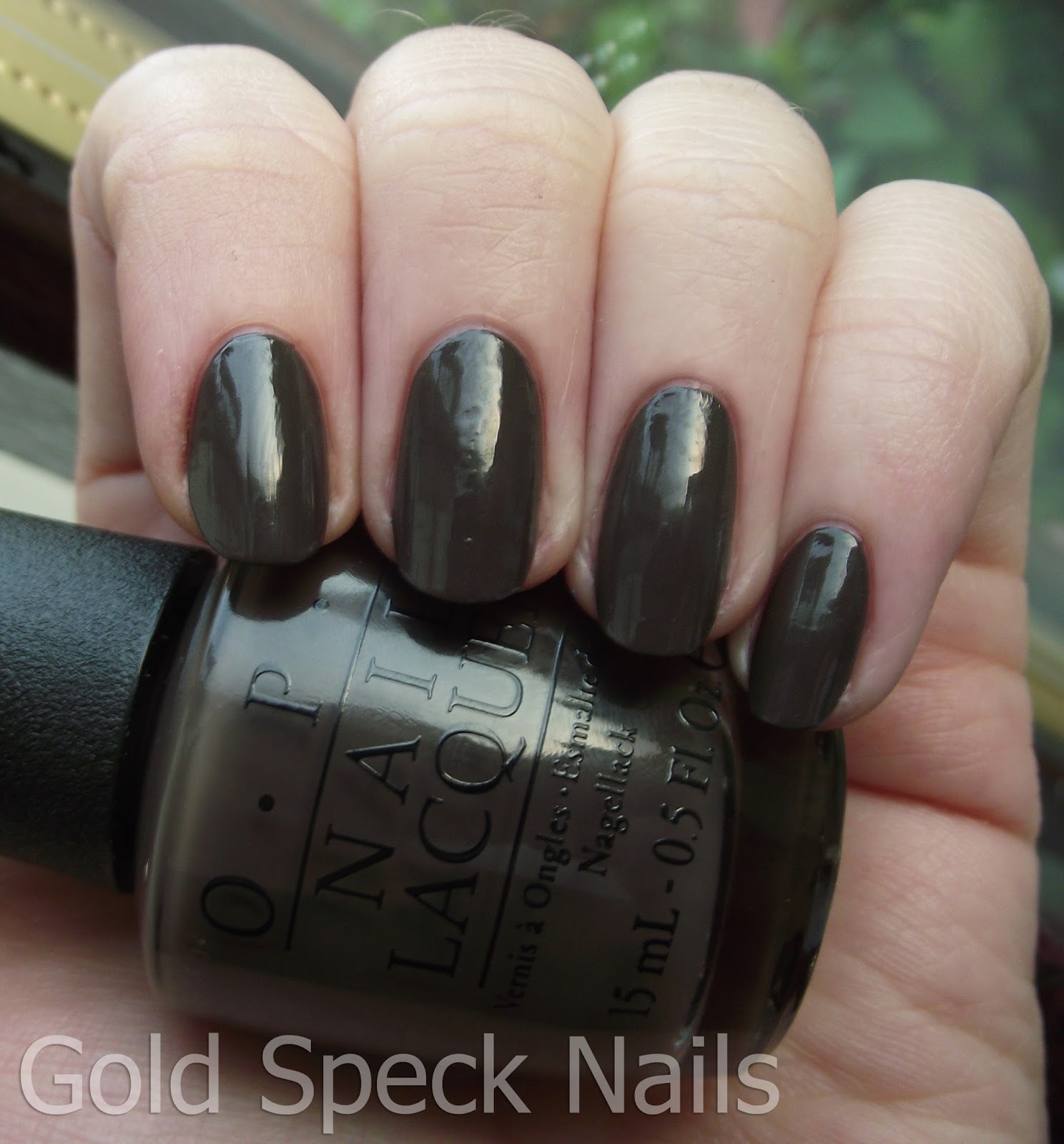 It usually takes a lot for me to love a brown, and this shade ticks every box.

Until next time!
Posted by Jennius - Gold Speck Nails at 1:57 pm 37 comments

Oh, it has been a while indeed!  I hope you've all had a lovely Christmas, and that the lead up to it wasn't too stressful like mine was.  I was still buying the odd gift on Christmas Eve (yes, I was one of those people this year!)

I was sent some Nicole by OPI polishes back in summer from the lovely PR ladies, and I wore a few of these religiously throughout July and August.  The polishes shown below are from the collection Seize the Summer.  I also stamped these using BYS Black Satin, and my Dashica Big SpD-A plate. 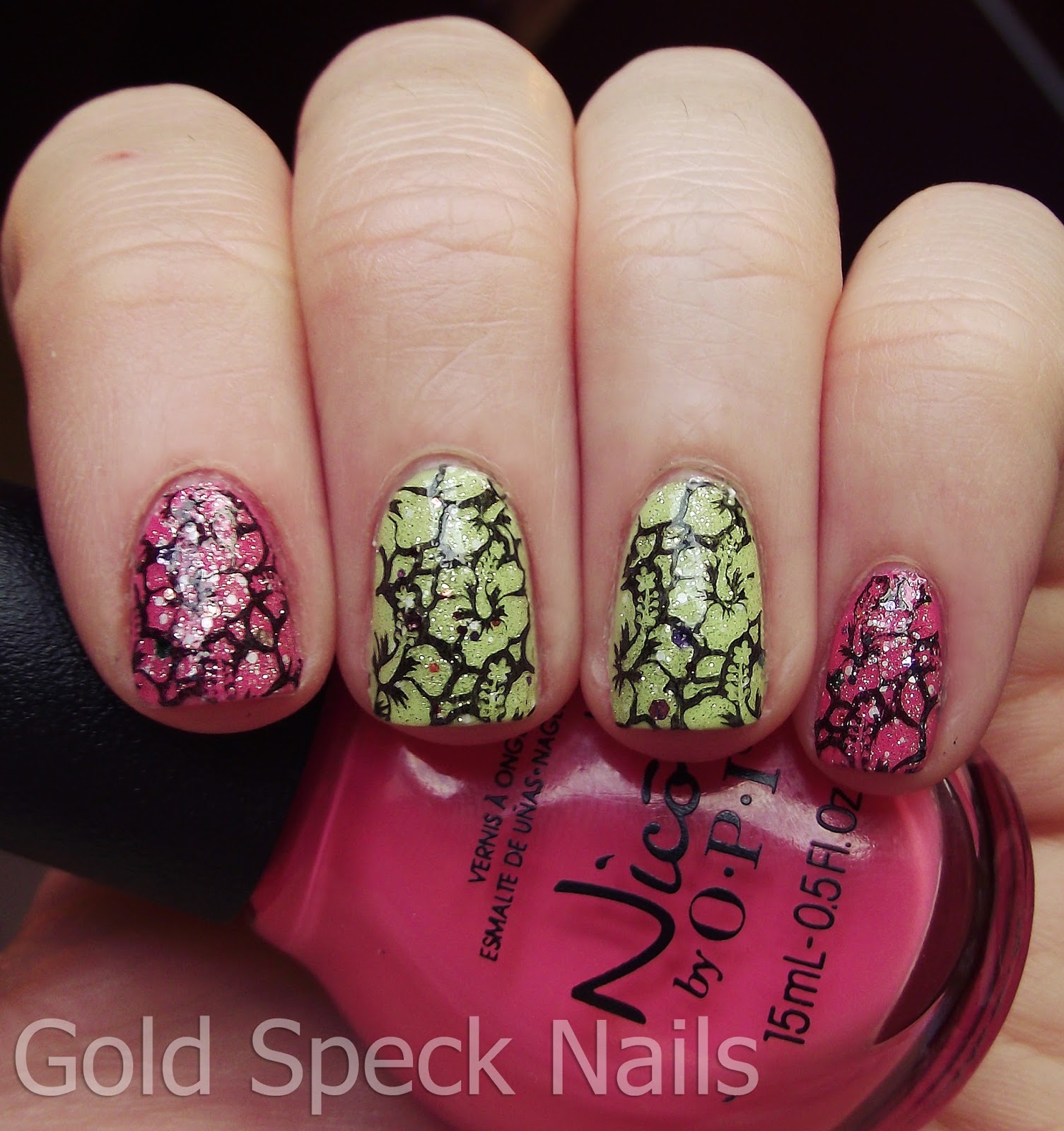 And below is the base before stamping.  Two coats of Leapink for Joy, and Lay it on the Lime with one coat of Shaved Nice. 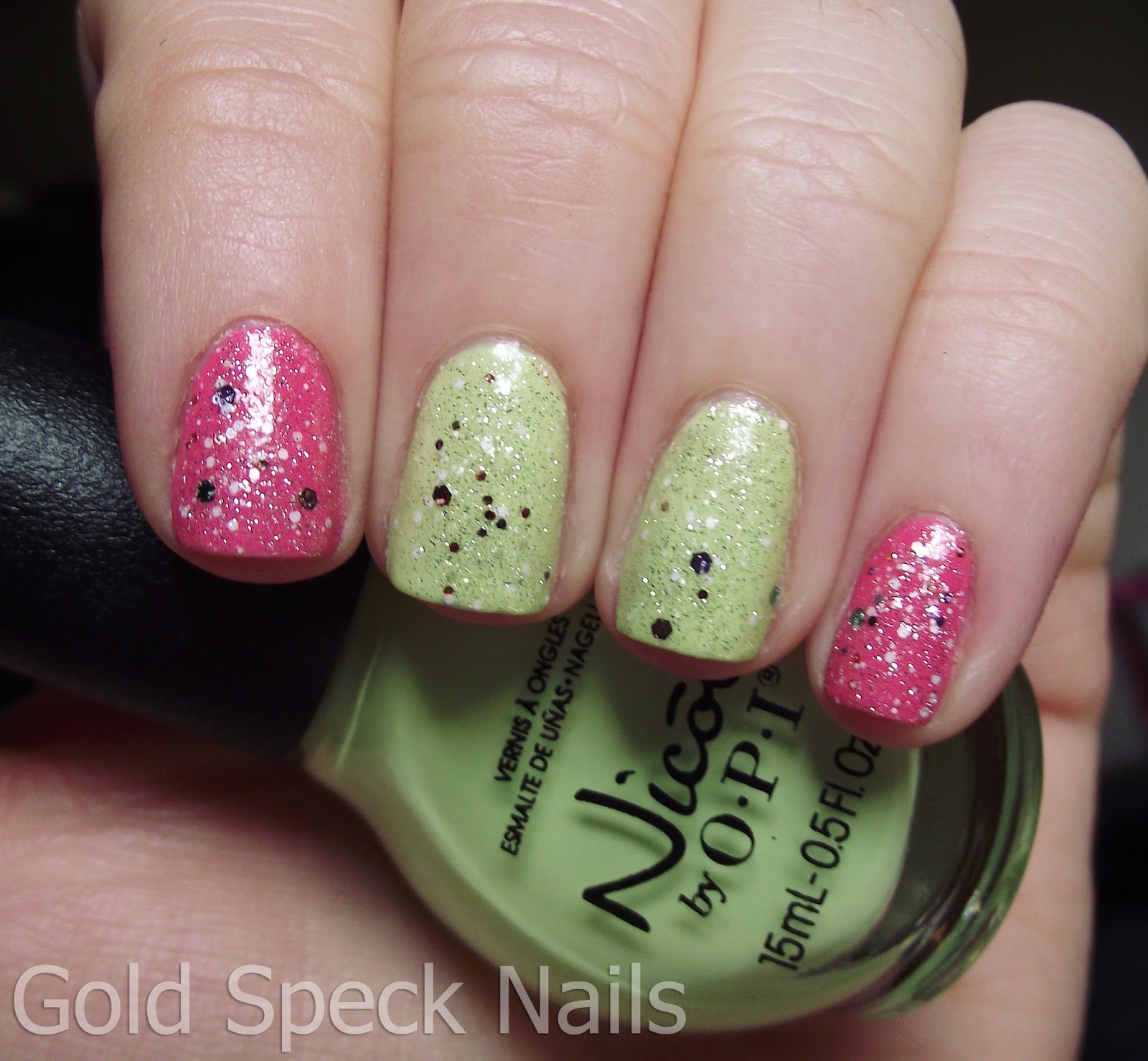 Not quite a great shot of the glitter, but as you can see it's quite an odd mix.  I however like the overall effect of how the pale white glitter brightens up the base colours.

That's all from me for now, I'm going to try and get my life more organised soon, so I'm hoping I can get back into the routine of doing my nails for fun, and not because my polish is more chips than anything, which is shocking I know!
Posted by Jennius - Gold Speck Nails at 12:28 pm 14 comments

Today I have a quick post on some glitters that I've been sent to review.  NYK1 Secrets contacted me to swatch some glitters.  So far I've only tried one glitter, so that's what I have to show you today. 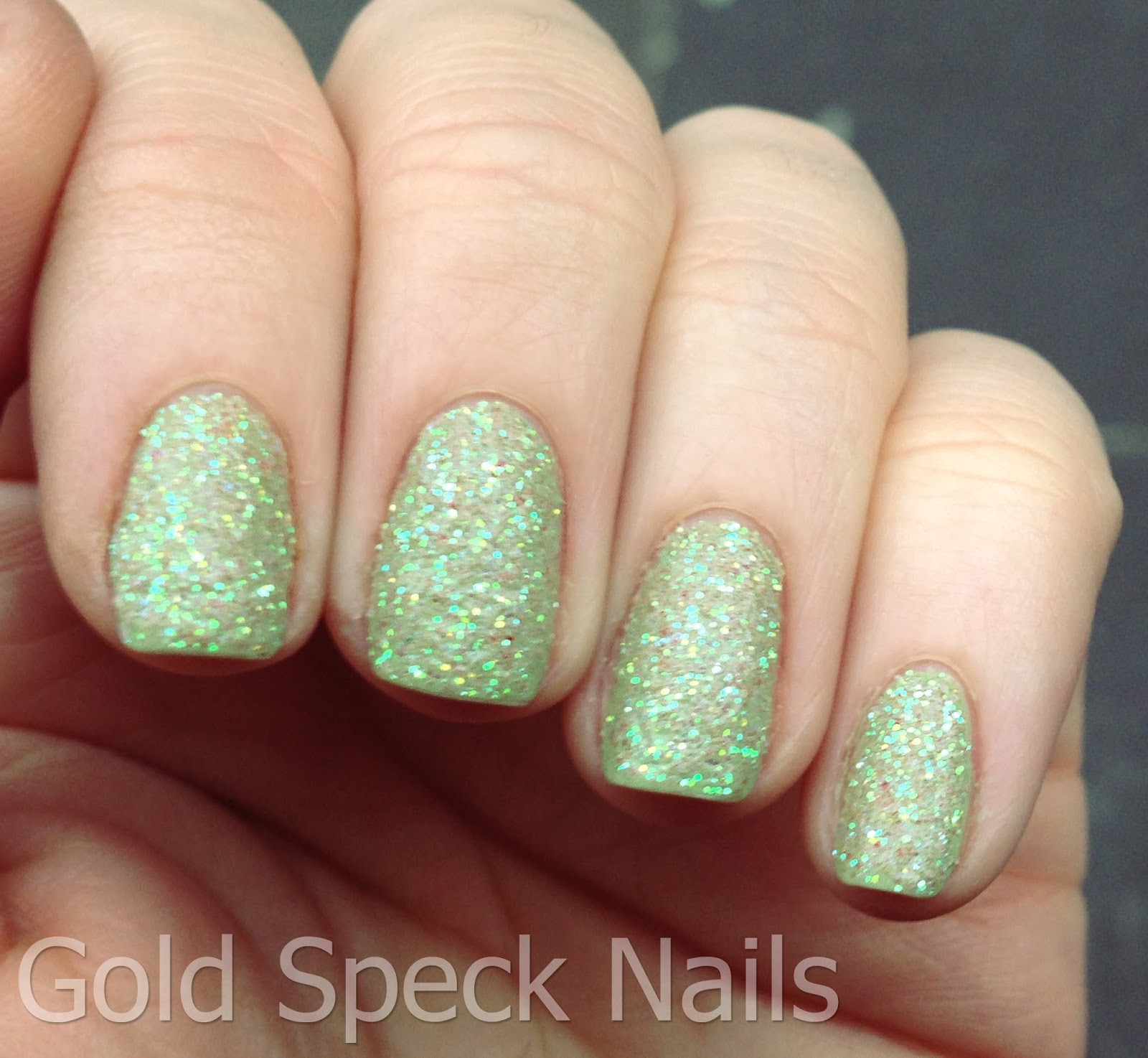 So I used a pale pink glitter that sparkled with a green shine, I sprinkled this over the wet second coat, and added a top coat before stamping.  There wasn't any problem with the colour in the glitter bleeding either.

A day later I did some stamping on top as It had been a wee while since I had done any stamping, and halloween was right around the corner (I joke, it was a few weeks away :P) so I decided to do some bat stamping using Bundle Monster BMH08.

I think what I love most about this image is that from a distance it actually looks like tiger stripe nails.  Please excuse my nubby thumb, I ripped it right down :( and since have ripped it down again after it had grown.  Bad times.

That's all I have for today.  I should be back soon though as I have brought my laptop to my boyfriends for the week, so I should get some editing done; that is if I don't get too engrossed in my new love Gotham!

**These glitters were sent to me for review**
Posted by Jennius - Gold Speck Nails at 1:19 pm 12 comments

Smallest of posts today with a quick pic of Models Own - Emerald Black (2 coats) and Pinky Brown (1 coat).

I wore these for about a week whilst I was busying myself trying to figure out how to decorate my room back in July.  I think I had forgotten how much I love Pinky brown's colour shift. 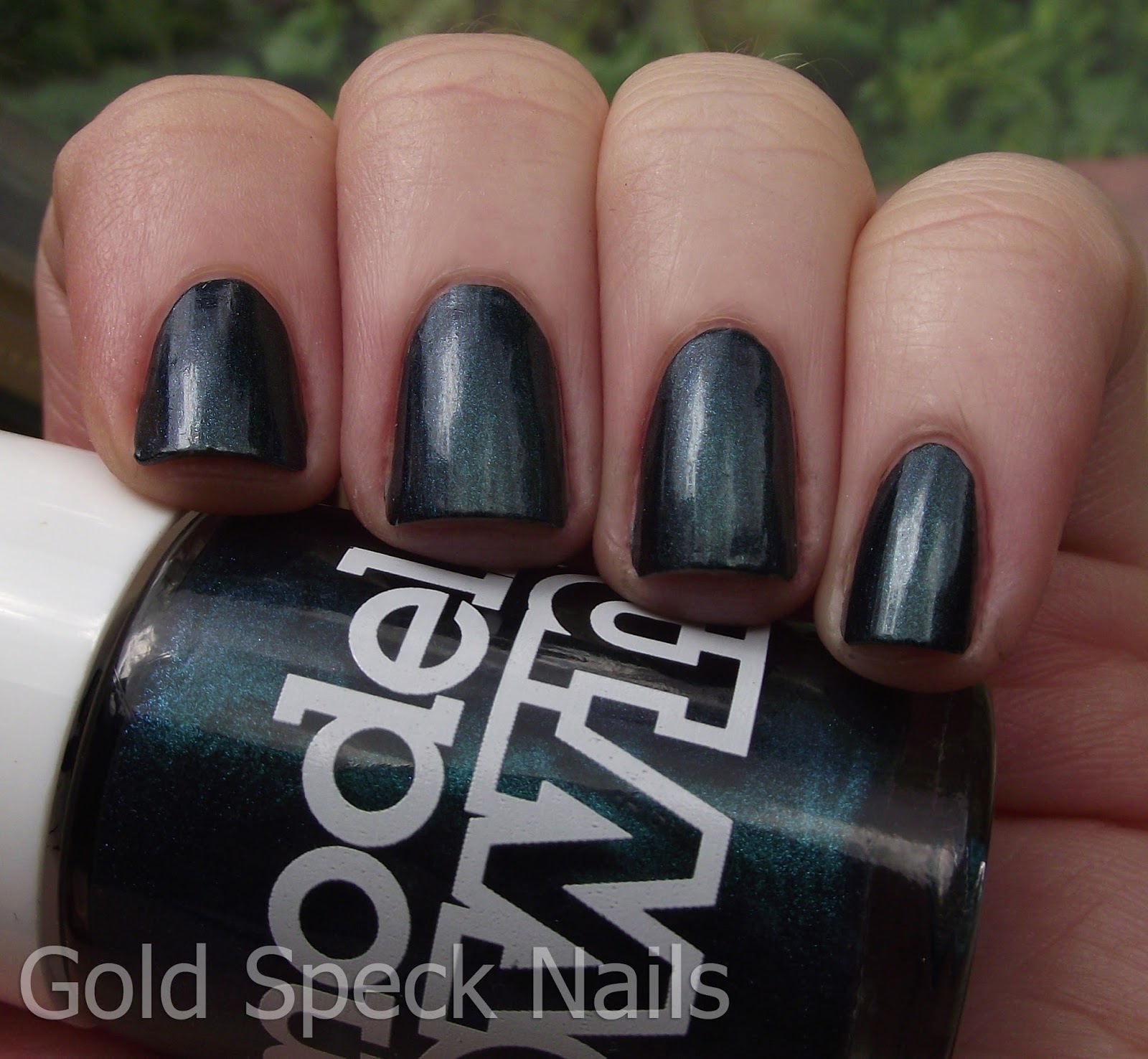 Hope you've all had a good weekend - I've had a proper lovely chilled one getting stuff ready for Halloween and lazing on the sofa with my boyfriend,  Love these cosy nights in!

Today I have a quick Swatch shot of a brand that is new to me, HJ Manicure.

Here's what they say about the shade I was sent:

Peach Blossom is a perfect peachy for nude-nails occasions.  I've actually worn this a few times since (but wasn't near a camera!) for some bridal style nails after swatching these. 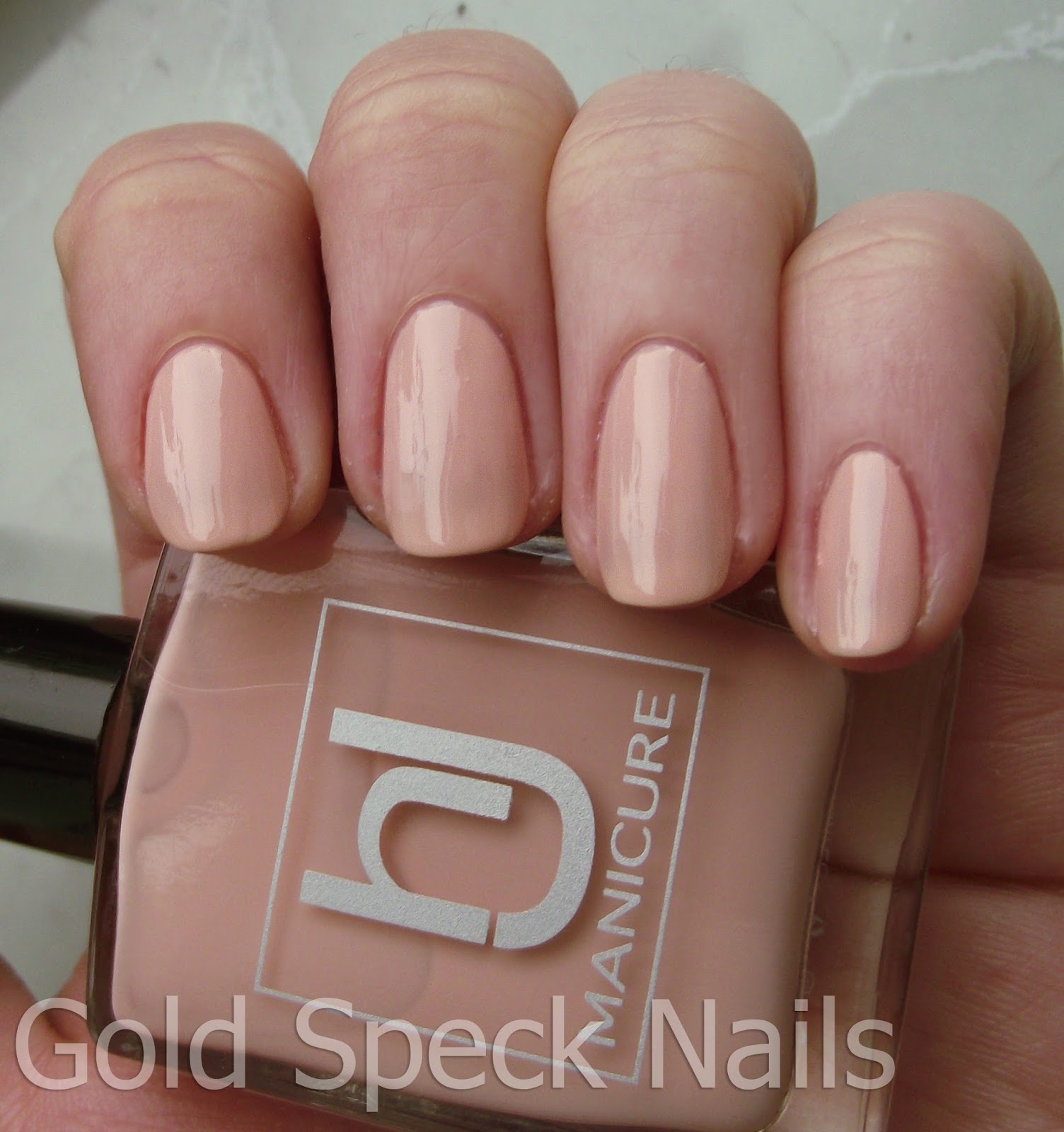 This polish was really hard wearing, and basically didn't chip.  I did have some tipwear, which is to b expected from the length of my nails at the time, my employment, and for the length of time I was wearing these.

You can get your hands on these polishes from www.HJManicure.com - I would check on Thunder Storm, a gorgeous lilac-grey!


**This polish was sent to me for consideration of review**

Hi guys, every time I post these days I feel like somewhere in the text is an apology!

I don't want to be one of those people who's full of false promises, or always saying I'm planning to do certain things by a certain time.  I'm doing my best. The truth is, my love for blogging and nail art just isn't the same.  Don't get me wrong, I still love sharing what I've done with my nails, and I've even bought some new stamping plates recently.  However, as life is a mushy haze of work, driving lessons, gym (no matter how short my visit :P) and people I love, the effort I put into my nails comes after that.

At the moment I'm actually letting my nails grow slightly, and they're oval/round rather than the mostly natural square they grow in.  I'm debating going for slightly more of an almond shape in a week or so too.

Anyhoo... onto the nails rather than the tiny rants.


So this was a little bit of an odd combination, and I'm not 100% how it came about as this was about two months back now.  I think it may have came from not owning many stamping polishes other than chromes that can stamp over dark colours.   Now, Barry M - Watermelon is not the darkest, but it is a very strong bold colour.  I think NYC - Foil'er Up sort of works.  Sort of.

Here's a swatch shot of Watermelon in case I haven't shown one before.  Lovely Deep Green that's almost muted. 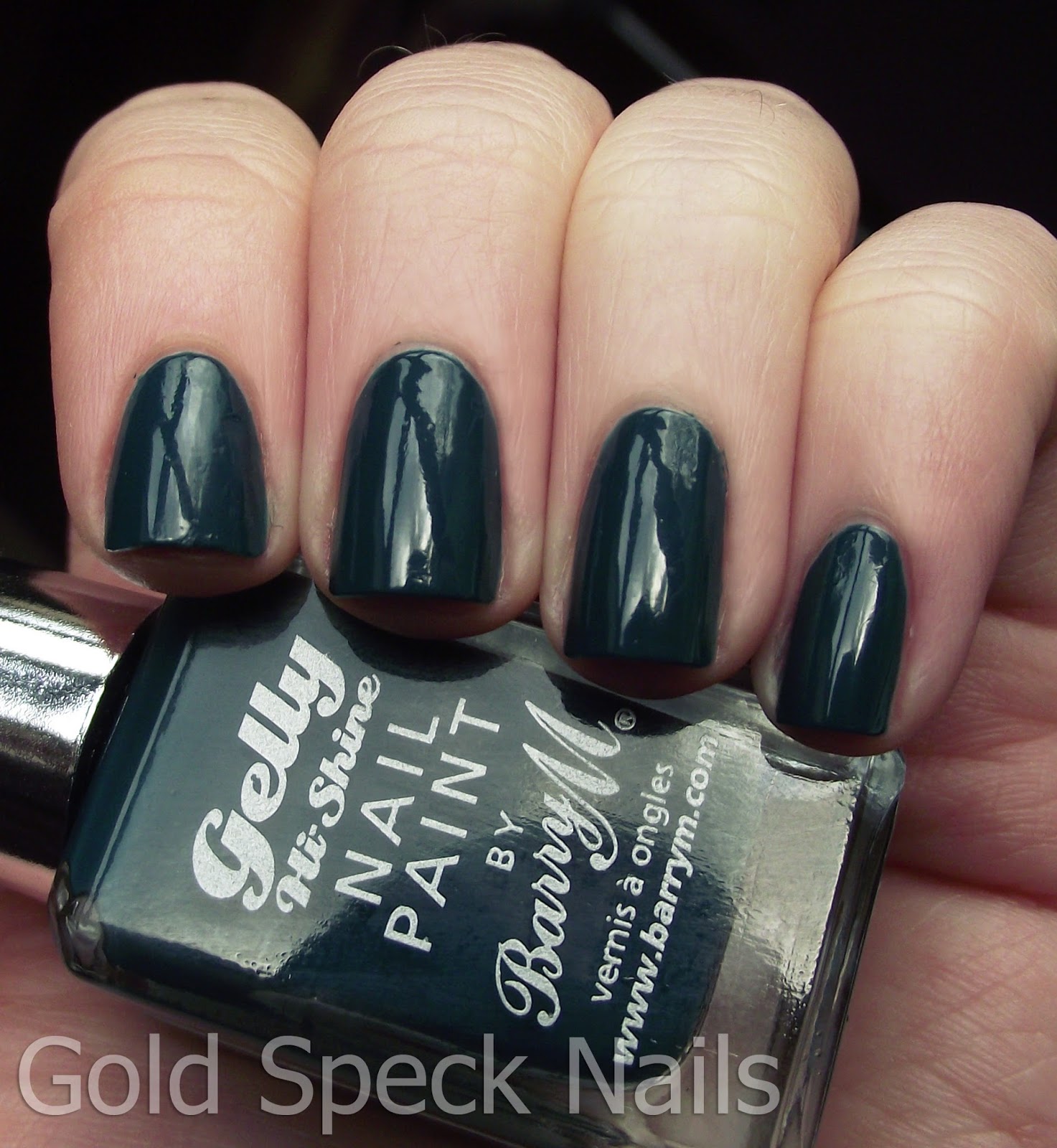 Hope you've all had a lovely weekend. Mine was another lazy one, snugged up in bed or the sofa watching TV. Bliss.